I’ve been in Montana for four full days now, but it only took a few hours standing upon its soil for it to claim a permanent spot in my heart. Choosing this beautiful state as a setting for a book and writing about it for the past few years had already convinced me it’s a special place. I’m blessed beyond measure God allowed me to come here. The mountains, the plains, the rivers, and the people have proved more wonderful than I imagined.
Thanks to the wonderful hospitality of friends, I experienced firsthand what it may have felt like for my protagonist when she arrived in Montana. I landed in Bozeman, she landed in Great Falls. There’s a huge difference, so we drove by Great Falls International Airport. The modest airport sits on a bluff that overlooks the city. Planes take off and land at the north end where there’s quite a drop-off. I’m told it feels like the plane will go over the cliff just before it lifts off the runway. Driving into and around Great Falls helped me to see what my character saw when the kind Blackfoot doctor chauffeured her from the airport to the reservation. The mountains are further away than I envisioned, but I was right on about the grasslands. Prairie as far as the eye can see. It’s not flat, but rolling. The bluffs, coulees, cottonwood trees, and the winding Missouri River gives the eye plenty to feast upon.
When we hit the road to take in the sights, we started in the mountains. The Rockies are truly spectacular, as are the many mountain ranges fingering out from the “backbone of the world”. There are the Big Belts, Little Belts, Swan, Scape Goats, Elk Horn, and Garnet Range among many others. They command attention as you drive by and though them, but you haven’t lived until you hit the Going-To-The-Sun road through Glacier National Park. Wow! Breathtaking is the best single word I can come up with. Really, there are no words to fully describe the beauty and grandeur of the Rocky Mountains. It’s one of those places you have to see for yourself and Glacier Park takes you up close and personal to these majestic peaks. 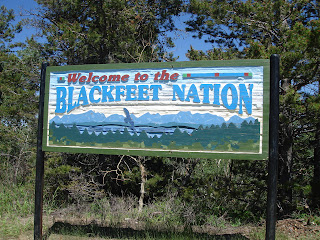 I have to say, the highlight of the trip so far was visiting the Blackfeet Indian Reservation. This is the main setting of the book I’m working on, so it was at the top of my list. I had some doubts about how I would be received, but they were dashed in a heartbeat when we visited the eye clinic in the hospital. The optician there, a young Blackfoot woman, invited me in to see the clinic and seemed excited I’m writing a book about an optometry student from California who serves as an intern on the rez. She even agreed to read the manuscript before it’s published. The icing on the cake was when I was introduced to two 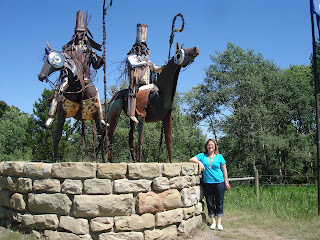 Blackfoot women who are in the ministry. One is also an optician in the eye clinic and both women worked with TJ and my “new friend” Sandy (she traveled with us for two days) when they were part of AGLOW. I was warmly accepted by them, which was a great honor for me.

Yesterday, we saw a part of Blackfeet history: the First Peoples Buffalo Jump located near Great Falls. When we think of a buffalo hunt, most of us envision Indians on horseback speeding over the grasslands, bows drawn and arrows aimed at the massive buffalo.
Sure, this happened after the plains Indians were introduced to horses, but before that they employed the ingenious and efficient method of herding the great beasts over cliffs to meet their death. Waiting below is the tribe ready to harvest the meat, bones, hide, and other parts to use for food, tools, blankets, shelter, and even toys. What an interesting part of our American history.

All the hours spent reading books and blogs, pouring over internet sites, or talking with people who have been there gives you just a glimpse of what a place is like. You have to go and see for yourself to truly appreciate the land and the people who live on it. I’m so glad I did.