1949 Advice from Singer and Writers of Old 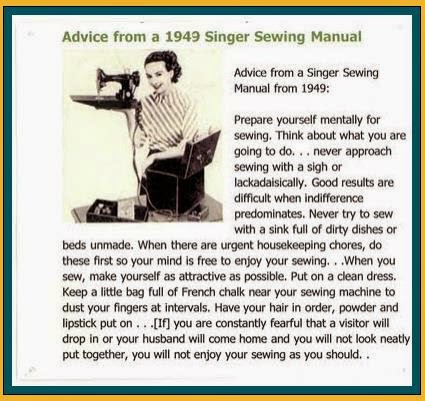 I saw this image on Facebook and just had to laugh. People had such a different mindset, not to mention expectations, back then. Remember those 1950’s TV shows such as Leave it to Beaver and I Love Lucy? It seems no matter what the women were doing— vacuuming, dusting, or preparing dinner—they were wearing nylon stockings, high heels, and their hair was perfectly coiffed. Crazy.

I prefer vacuuming in my pajamas or sweats, thank you.

After reading those words from the 1949 Singer Sewing Manual, I got to thinking about authors from the old days. Things were way different back then. They typed entire manuscripts on typewriters using actual sheets of paper. Can you imagine what it would take to produce a full-length novel? Did they type out a first draft, go back and revise it, and then re-type the whole thing all over again? They must have gone through reams of paper and typewriter ribbons in those days. I’m sure they pulled their hair out before “The End” ever made it to paper. Maybe that’s why most of them wore hats.

And what did writers do before the advent of typewriters? Parchment and feathers dipped in ink?

If you think long and hard about how rough those authors of old had it before computers became main stream, with their delete keys and back space buttons, you’ll have a whole new appreciation for writers such as Edgar Allan Poe and Charles Dickens.

We have so easy, don’t you think?